Go back through the timeline few years, and you will find yourself in an IRC chat room looking for some new people to form a friendship, or someone in the opposite sex for maybe an affair. Days of changed because technology has grown so much bigger and more effective, thus anonymous video conference has become highly popular.

Omegle is such a network that allows two people to find random strangers on the internet and carry out a conversation. Upon both side’s agreement, they would be able to share their identities and find other means of communication as well, but initially Omegle would be their meeting platform.

Omegle is a free to use online video chatting website that allows two strangers to take part in a one-to-one video conference. The company was founded back in March 25, 2009 and ever since the popularity has grown exponentially. Alexa ranking on this website is 2,793, recorded on April 2014. Omegle has been created by Leif K-Brooks.

It’s allowed for 18+ people, or 13+ with parental guidance even though this rule is violated almost every single moment. However, the video windows are constantly monitored on Omegle to keep the environment clean, thus it’s more or less a secure platform to meet & greet with stranger people. They ask users to fill captcha form to make site safe from automatic bots. If they found unusual activity, they ban people from website.

Since February 2015, a new update in Google Chrome has caused Omegle to stop working on Google Chrome. However, the issue has taken place before. Basically an update in the Adobe Flash Player would cause the trouble, there could be other reasons as well. Sometimes, it shows issues like omegle error connecting to server. 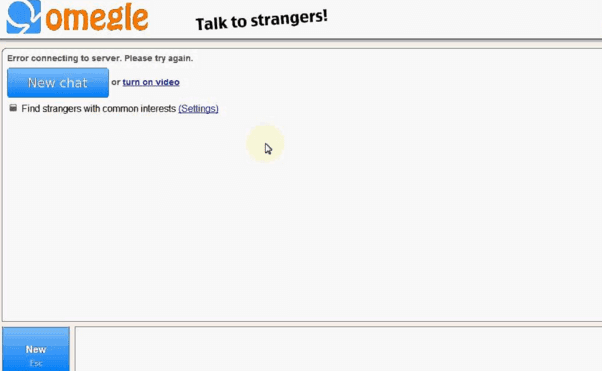 Google Chrome offers the best in class video chatting support for the websites that need it, in case your Omegle is not working on Google Chrome then either the Adobe Flash Player has stopped working due to some reason, or some extension that you have installed on your browser is causing the issue.

Once Google Chrome is updated, type chrome://components in the address bar and hit enter. From the new window that appears, look for pepper_flash and check for update under the following tab. If Adobe Flash Player isn’t the latest version, the update will run.

If you had installed any extension in recent times, check whether they use Adobe Flash Player for any purpose. Or just remove all the extensions you have on Google Chrome for now and test whether Omegle works on the system.

The steps mentioned above are the preferred workarounds to get Omegle working again. If none of the above works, you might require a fresh installation of Windows OS on your computer. Meanwhile, you can try many other omegle like sites available on internet.

How to Remove Ban From Chat Alternative

How to Fix Chatiw is not working in Your Country

How To Fix Omegle Camera not Working on Video Chat

How to Unban from Chatroulette

How to Fix captcha problem on Omegle

4 Quick ways to get unbanned from omegle

How to fix Omegle error connecting to the server